After several days of configuring and troubleshooting, finally got Lync integration with Cisco CUCM 8.6 working in a lab environment. This article walks through the steps taken and some of the problems encountered. Microsoft has a document that provides step-by-step guidance on the integration available for download here which this article is based on. The steps in the document will not be repeated in this article, rather only the specific implementation in the lab and any deviations will be highlighted. The exact version of CUCM used in the lab is 8.6.2.22900-9 which is slightly newer than the 8.5.1.11900-211 version that the document is based on. Nonetheless all the steps in the document are still valid and can be used with some minor changes which are described in this article. Below shows the diagram for the lab setup: 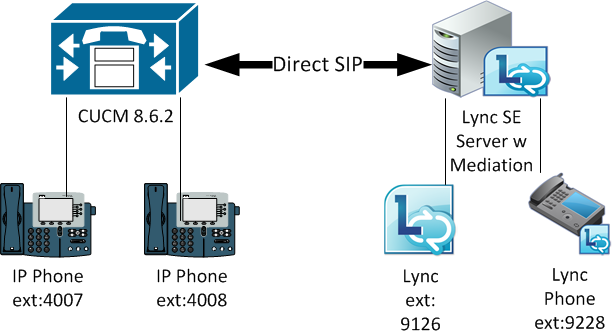 When a user dials a number, the digits are send to CUCM which then uses the DN, TP and RP to perform a Digit Analysis process to determine whether to ring another user or send the call to a SIP Trunk or gateway. In Lync we call this Reverse Number Lookup (RNL). To control whether a user has permissions to ring another user or utilize a route to make PSTN or trunk calls, CUCM uses Partitions and Calling Search Spaces.

Partitions are collections of DNs, RPs and TPs that divide the Dial Plan into segments. For example, Partition Chicago contains directory numbers for users in Chicago and the Route Patterns and Translation Patterns for that locale. Any DN, RP or TP that is not assigned to a paritiion belongs into the Null Partition.

Calling Search Spaces (CSS) are an ordered list of Partitions grouped together and assigned to devices. Numbers in a partition are only reachable by devices that are assigned a CSS that contains that partition. Digit Analysis will only process DNs, TPs and RPs within the CSS assigned to the calling device. Therefore CSS controls what numbers a device can call. CSS can be assigned to phone lines, phone devices, gateways and trunks. Numbers not assigned to any Partition belong to the "Null Partition" and are reachable by all devices.

Media Resource Groups (MRG) are logical groupings of media resources such as conference resources, transcoder
resources, MOH servers and Media Termination Points. A Media Resource Group List (MRGL) is simply a prioritized grouping of MRGs. The most common use of MRGs and MRGLs is to restrict media resource usage on a  geographic basis. For example, an MRGL can be assigned  to a phone at a remote location that only allows it to access local conference bridge resources so that WAN bandwidth is conserved.

With the baisc CUCM concepts covered, we can proceed to configure the SIP Trunk. As per steps provided in the document, we need to do in the following order:
1. Create SIP Trunk Security Profile
2. Create SIP Profile
3. Create SIP Trunk
4. Create Route Pattern 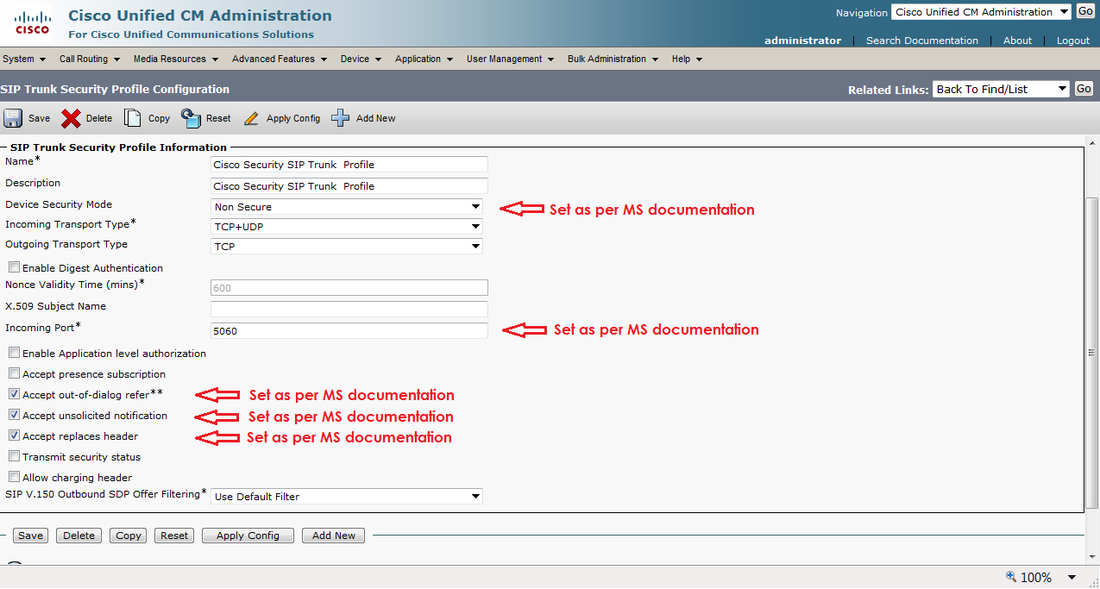 2. Create SIP Profile
Next, for the SIP Profile, we created as per documentation as well with no deviations as shown below: 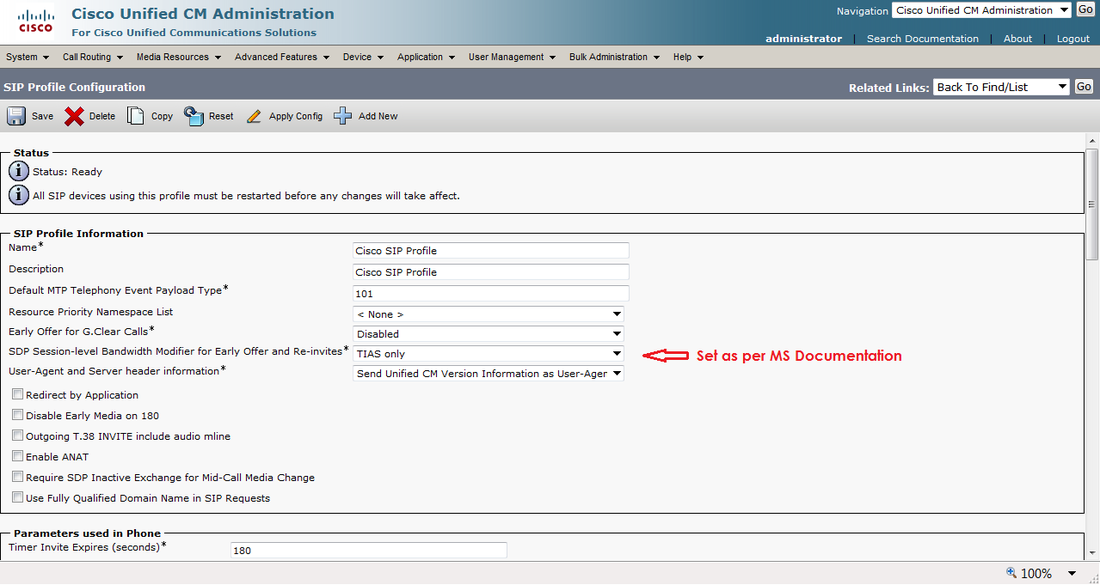 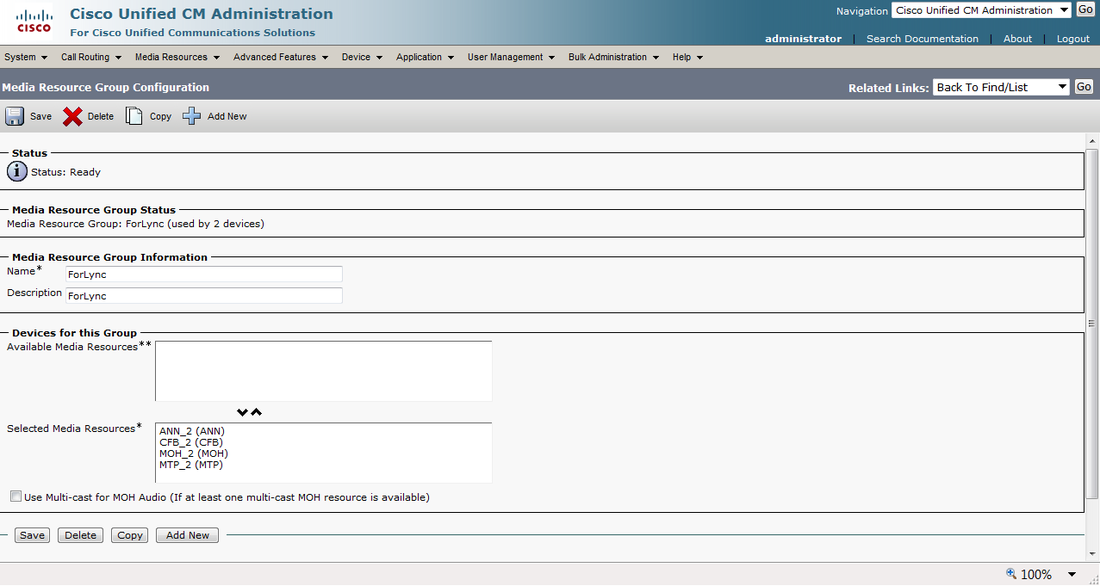 With the MRG defined we then add it into a MGRL created under Media Resources->Media Resource Group list as shown below: 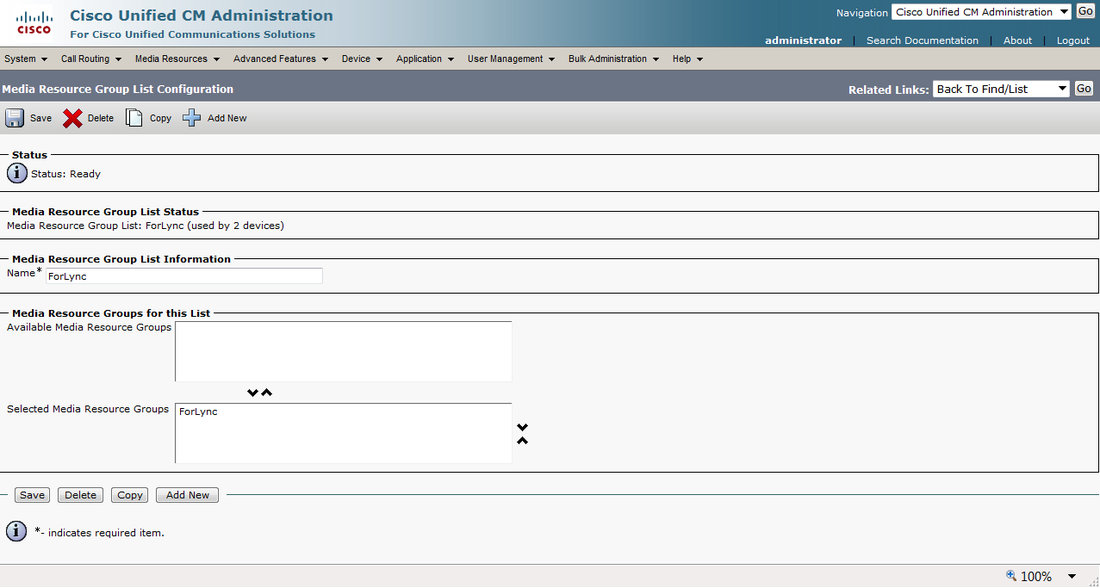 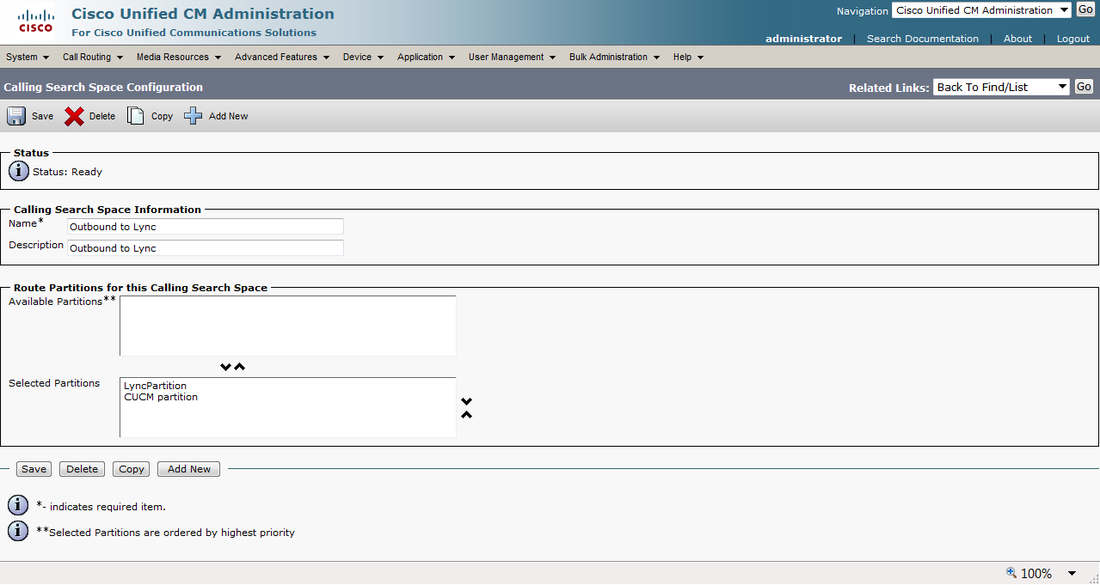 The CSS shown above contains the Route Partition named "LyncPartition" which is defined in the Directory Number (Line[1]) of the Phone Configuration of the two Cisco IP Phones along with the CSS "Outbound to Lync": 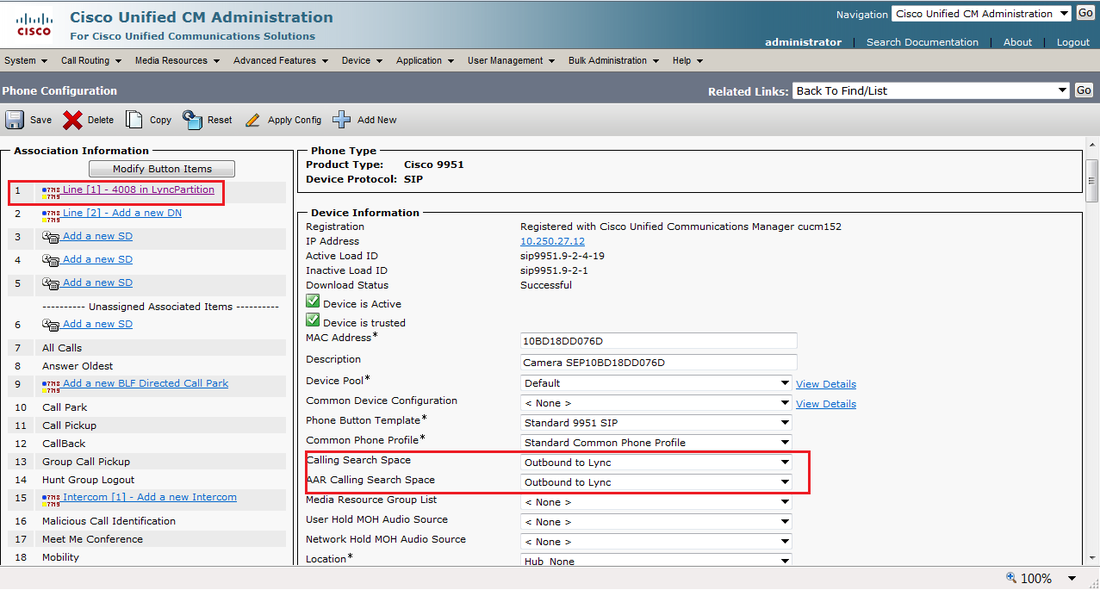 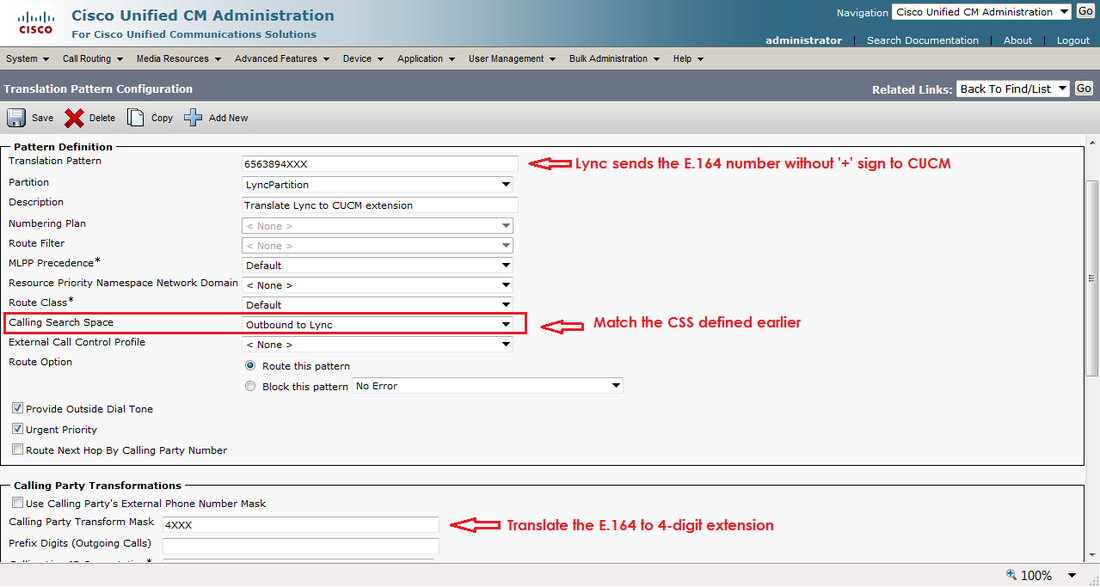 In this lab, we are translating a 4-digit dialed number from Lync to E.164 for CUCM without the + sign. We will be using the Trunk Configuration to do it as shown later.

Now we are ready to create the SIP Trunk. This is done under Device->Trunk and we have defined the SIP Trunk as shown below: 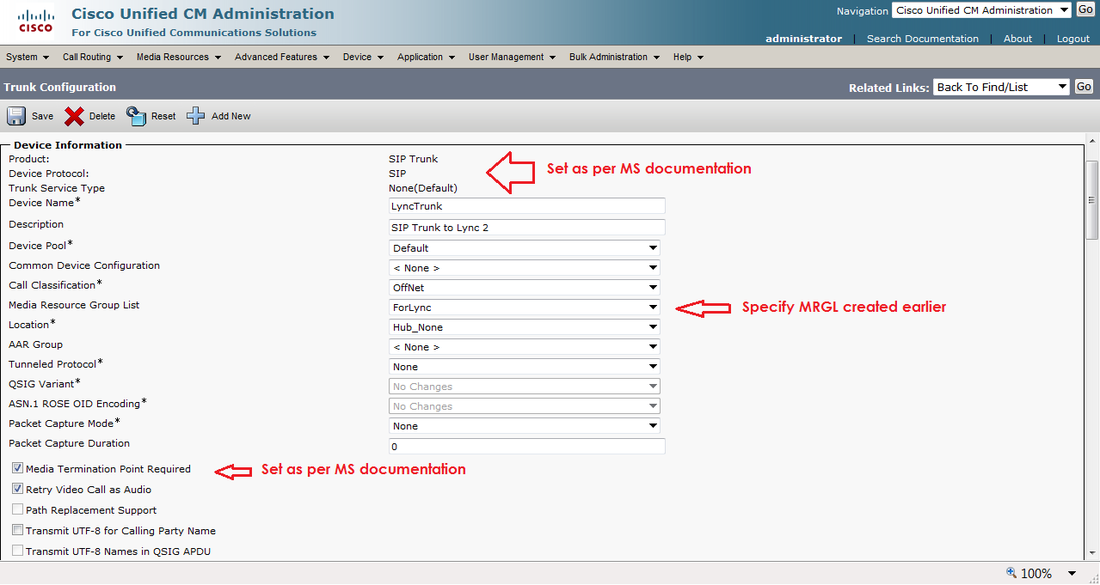 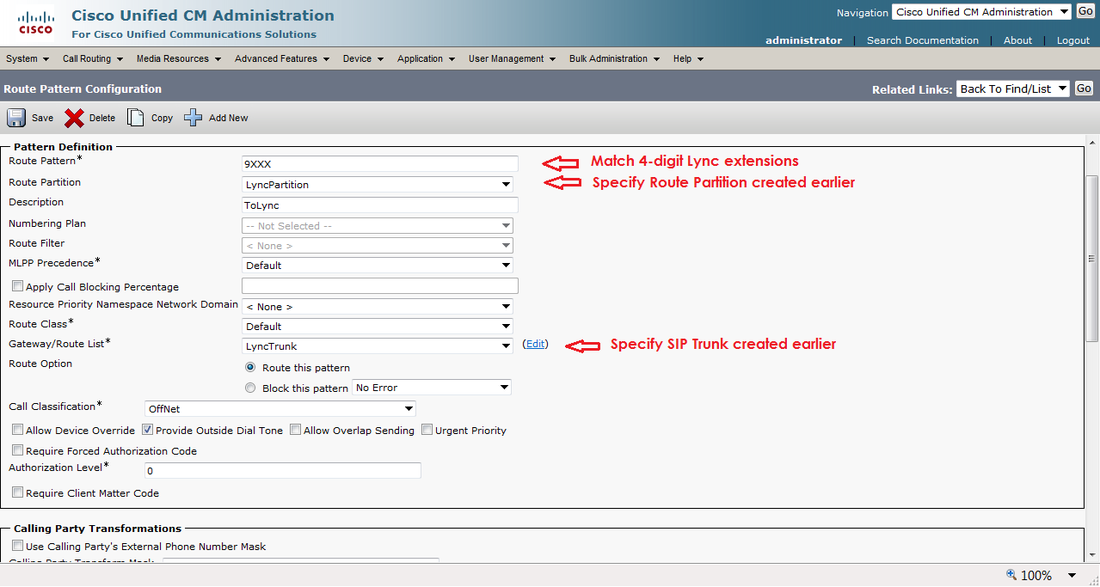 As per the MS documentation, these are the tasks to configure Lync Server to perform Direct SIP integration with CUCM:
1. Add CUCM to the Lync topology.
2. Configure the dial plan.
3. Add voice policy and route.
4. Add Trunk configuration. 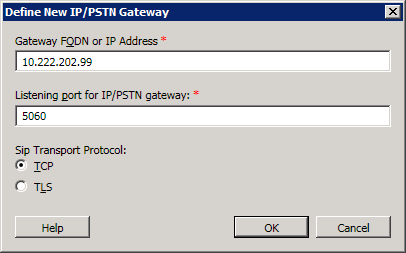 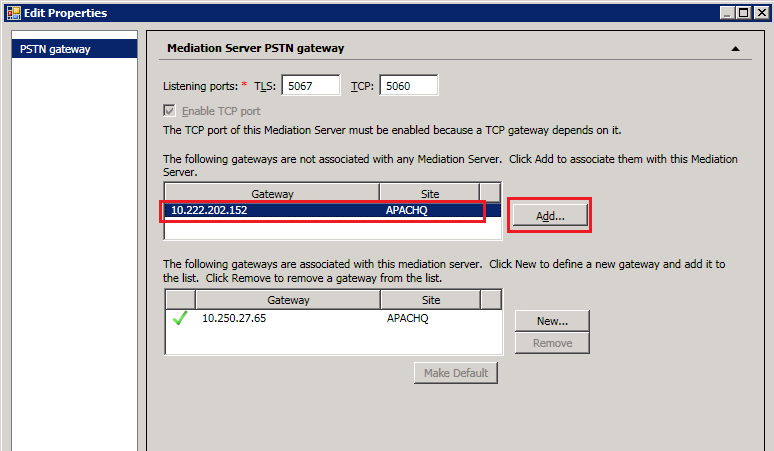 We then published the topology and made sure there we no errors. 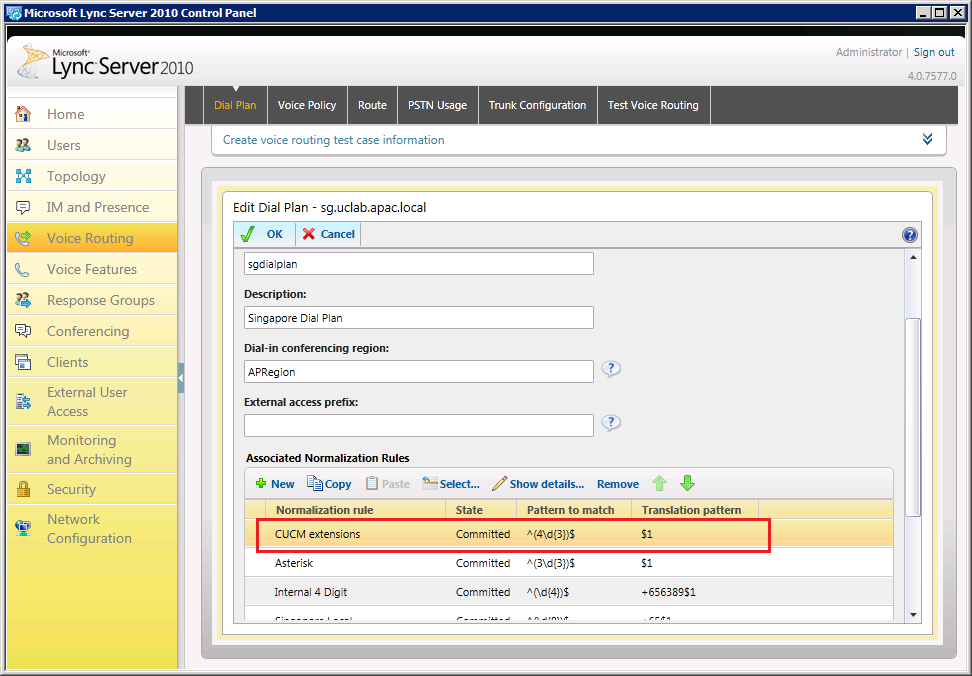 3. Add voice policy and route
Now we edit the Global Voice Policy to add a new PSTN Usage as shown below: 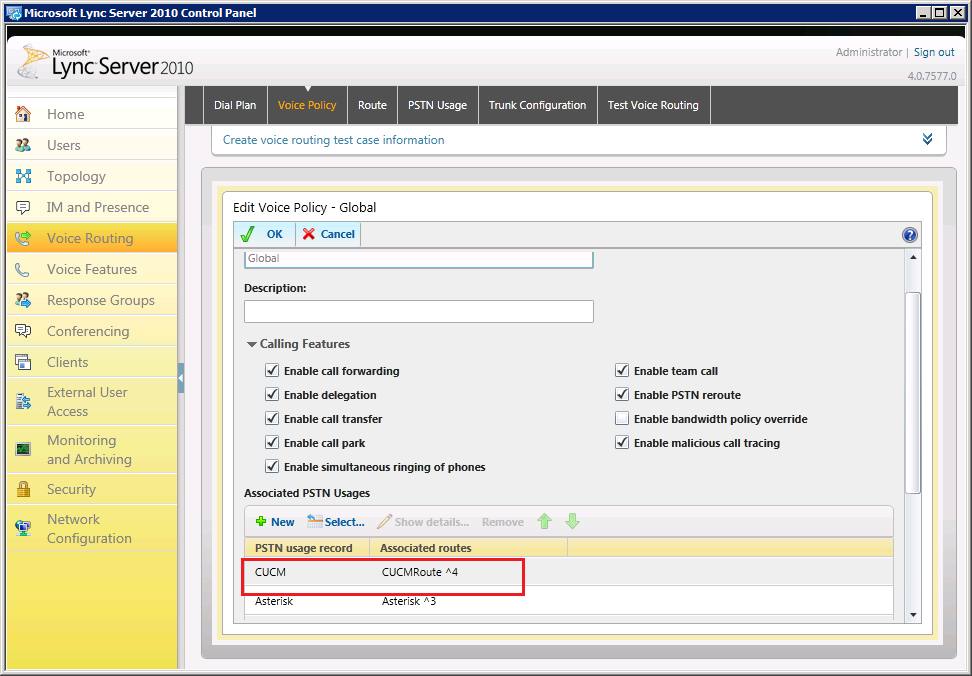 The actual Route matches any dialed number starting with 4 and routes the call to the CUCM as shown below: 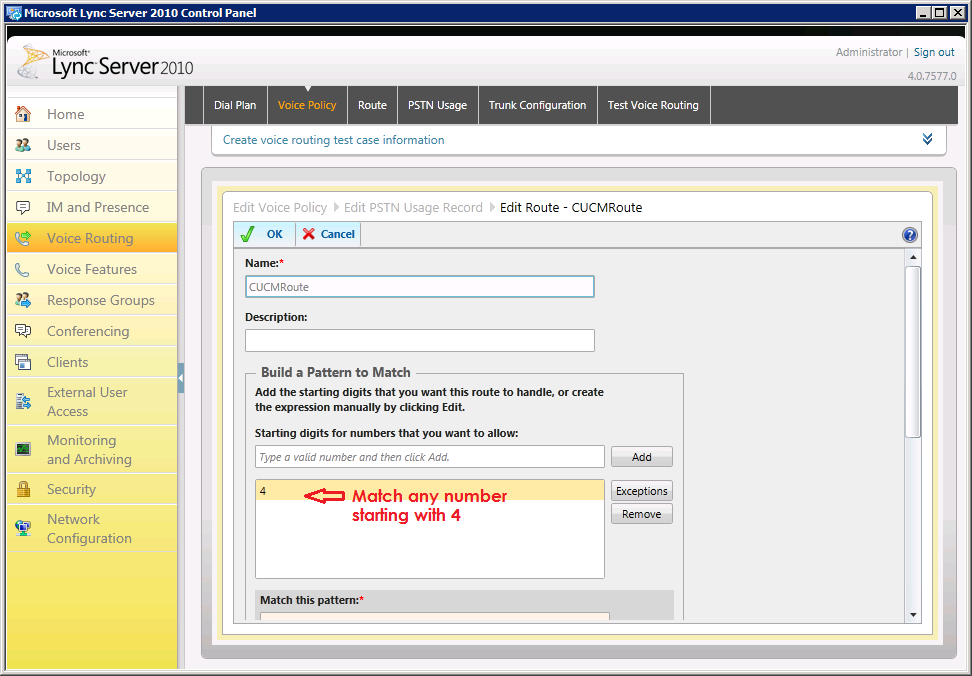 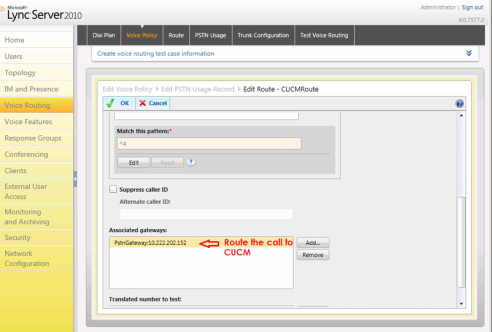 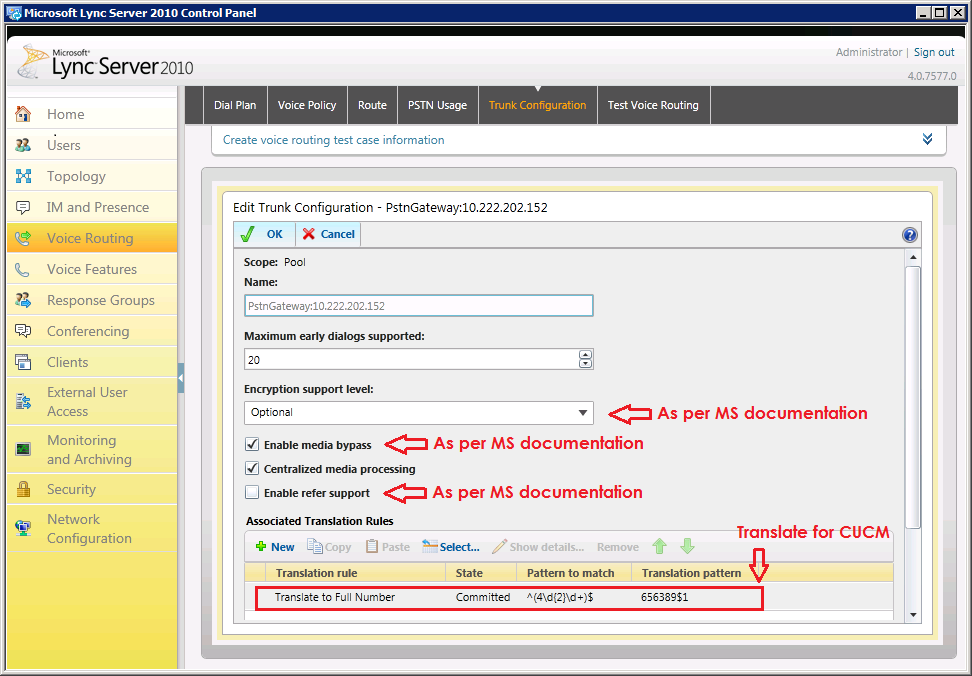 We were getting call failures in the beginning and Lync Server's SIP Trace shows errors as below:

Based on the ITU Recommendation Q.850, this error is due to "Unallocated (Unassigned) number". Later we found this to be due to the Device Pool that the CUCM Phones were in did not contain the correct CSS. Device Pools are defined under System->Device Pool. After selecting the correct CSS in the Device Pool, then all was fine and we are able to get calls to/from Lync and CUCM working: 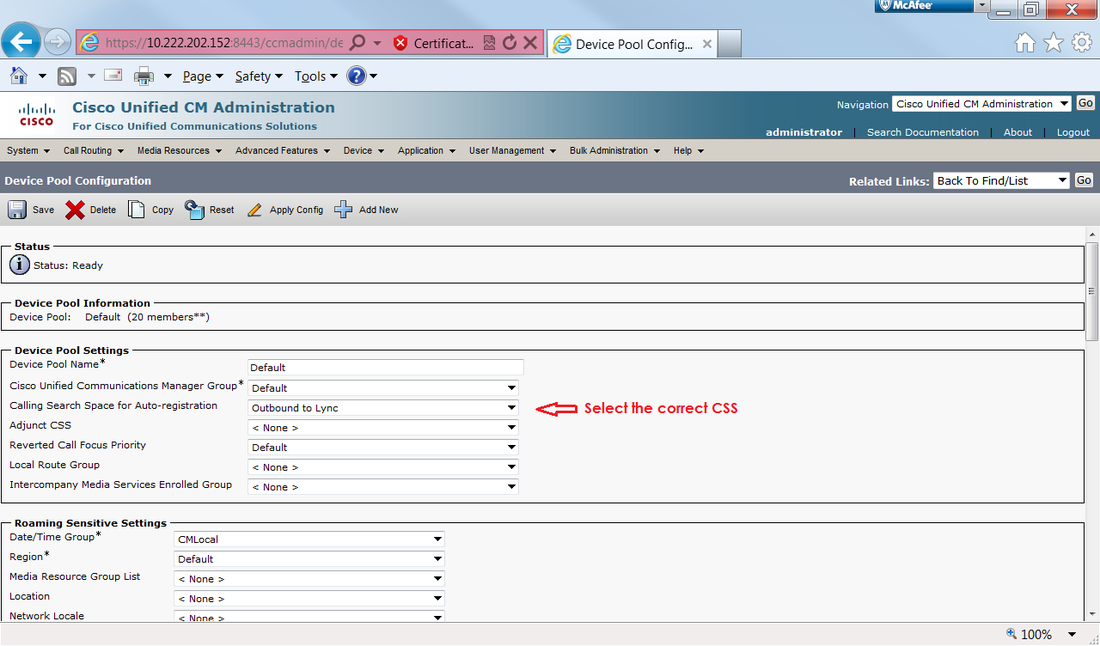 So it was not trivial to integrate Lync and CUCM even in a simple lab environment but the documentation provided by MS does help tremdously; many thanks to the authors. We hope this article is useful for those who want to test CUCM integration with Lync and many thanks also to my coleague HB Low for providing much assistance on CUCM.