In a previous article, we discussed the steps to deploy a new Lync2013 Edge server into a Lync2013 FE pool that was coexisting with a legacy Lync2010 Pool with Lync2010 Edge. Users homed on the Lync2013 FE pool continued to use the legacy Edge server for remote access and federation. Although having both the legacy Edge and the 2013 Edge providing remote access is possible, such a configuration would be more difficult to manage and moreover, only one Edge can be used for federation. In this article, the steps to migrate completely to the new 2013 Edge will be
discussed. Users still homed on the legacy Lync2010 FE pool as well as those homed on the new Lync2013 FE pool  will use the new 2013 Edge for Remote Access and Federation. The end result should look like the diagram below: 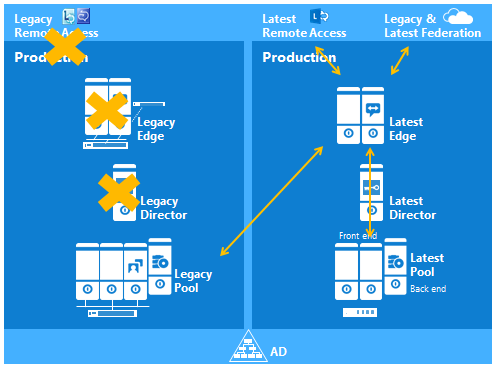 In a production environment, changing the federation route and media traffic route requires downtime for the Lync Server 2013 and Lync Server 2010 Edge Servers. Federated access will be unavailable for the duration of the outage.

In topology builder, edit the properties of the Lync2013 FE and associate the Edge pool with the new 2013 Edge: 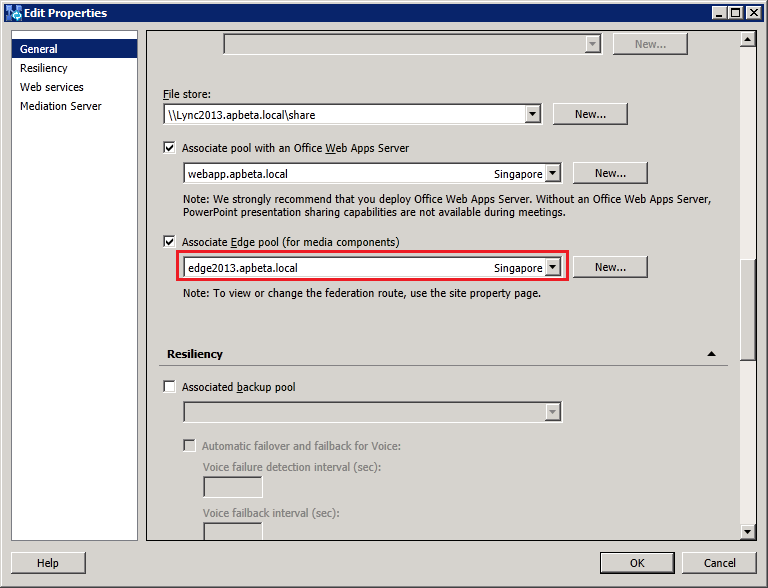 The Edge pool (for media) should now list the new 2013 Edge as shown below: 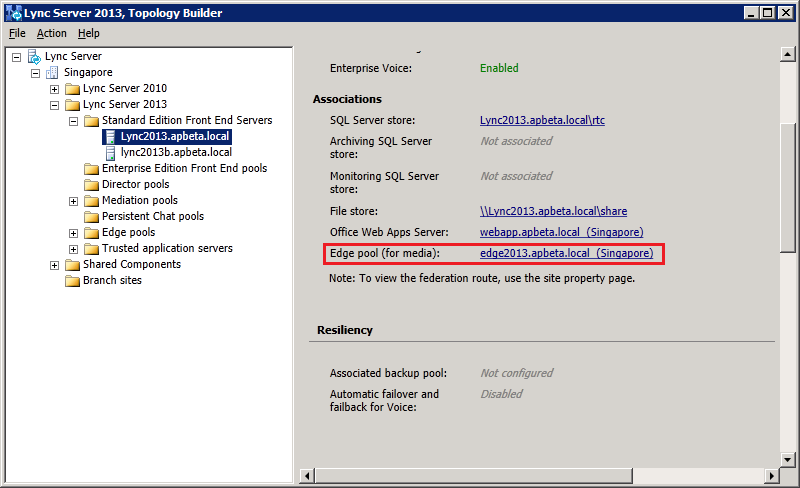 Now edit the properties of the 2013 Edge server and verify that the next hop pool now points to the Lync2013 FE pool as shown below: 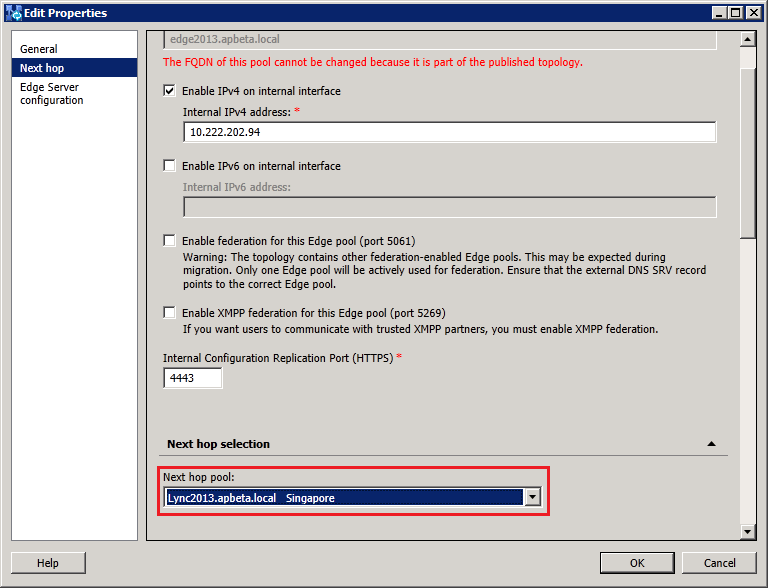 For those users still homed on the legacy Lync2010 FE pool, we also want them to use the new Lync2013 Edge for media traffic. In topology builder, edit the properties of the Lync2010 FE pool and associate the edge pool to the new 2013 Edge: 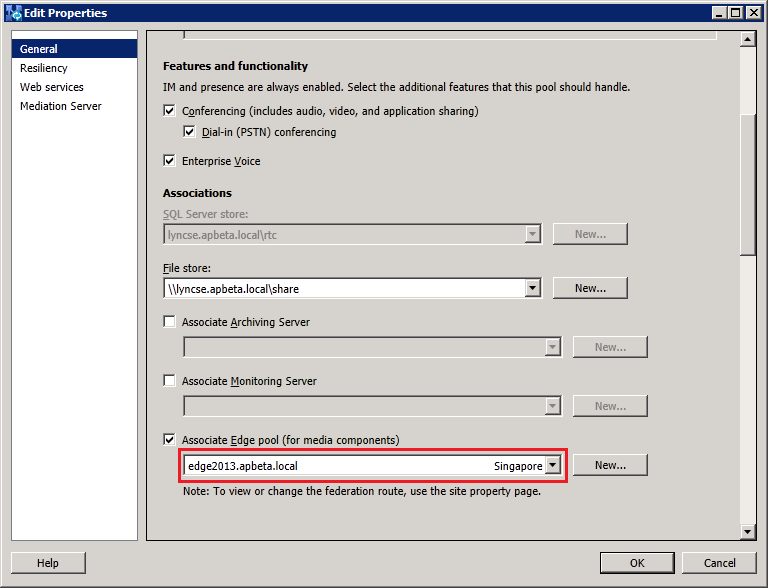 Next. since we want to migrate federation services from the legacy Edge to the 2013 Edge, we edit the properties of the Edge2013 to enable federation: 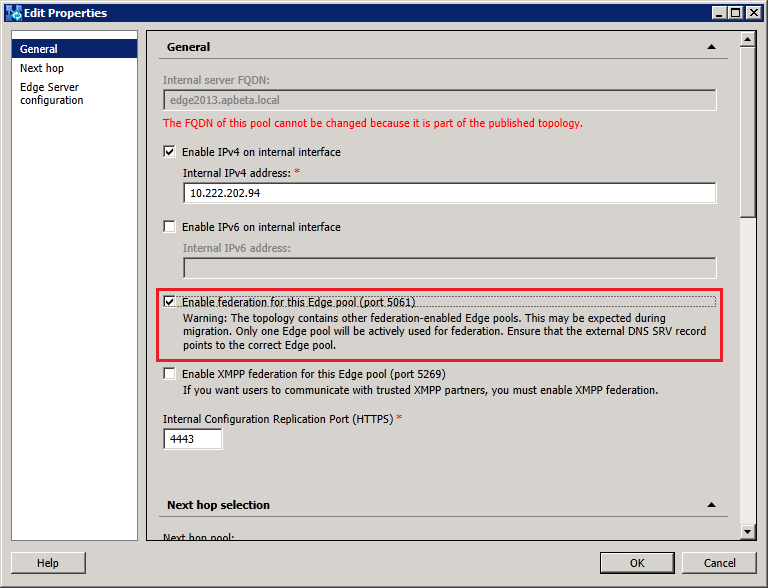 Note the warning that the topology already contains other federation-enabled Edge pools. This is because we have not yet disabled federation on the legacy Edge server, a step which will be done later. For now, we publish the topology: 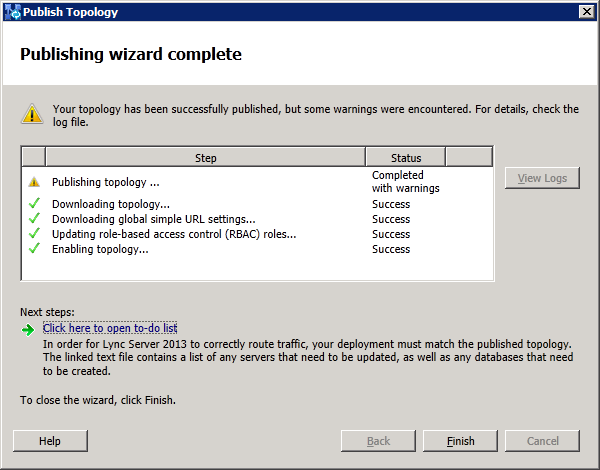 After successfuly publishing the topology, click to open the to-do list to see which servers require updating of Lync components and then update by opening the Deloyment Wizard on those servers and running "Install or Update Lync Server System" and "Setup or Remove Lync Server Components".

We now want to migrate the federation route from the legacy Edge to the new 2013 Edge. Using topology builder, we edit the properties of the Site and select the new 2013 Edge under the "Enable SIP Federation" checkbox: 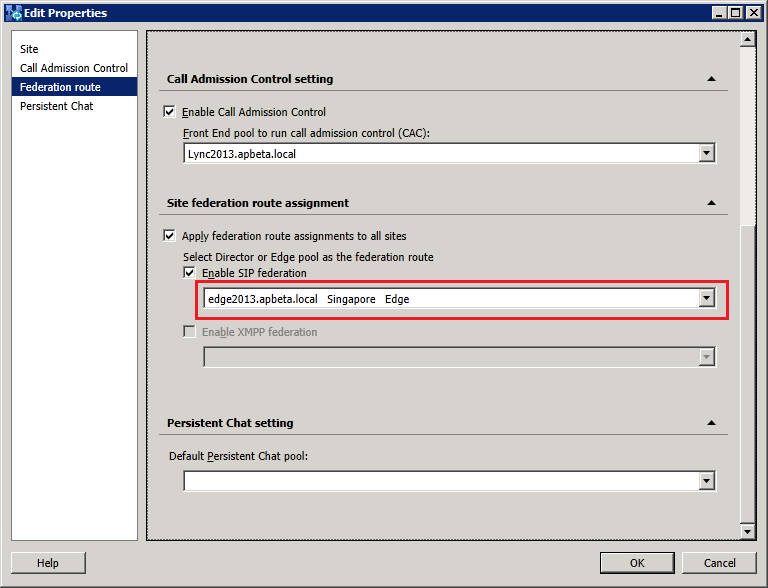 Topology will now display at the top level node "Lync Server" a "Topology validation warning" that there is more than one Federated Edge Server which is normally the case for migrations, but as stated, only one Edge would be actively used for federation and the correct external DNS SRV records, ie :sipfederationtls._tcp.domain.com needs to be pointing to the correct Edge server. In our case this should point to the new 2013 Edge. 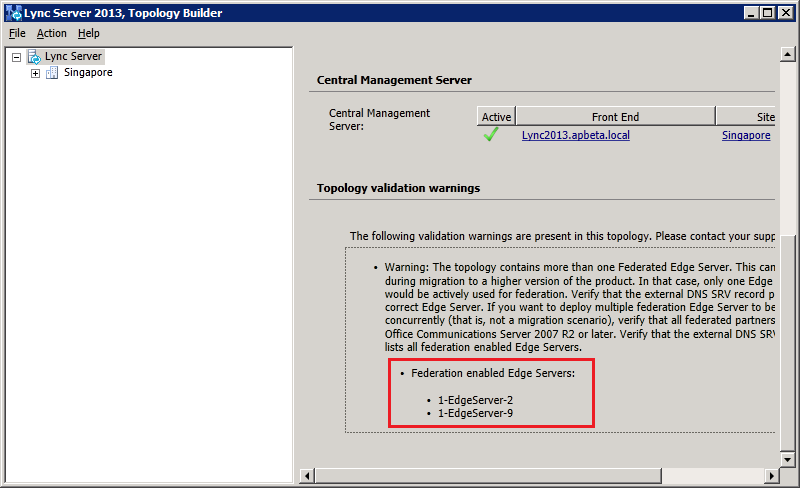 Note that the federation is still enabled on the legacy Edge as shown below: 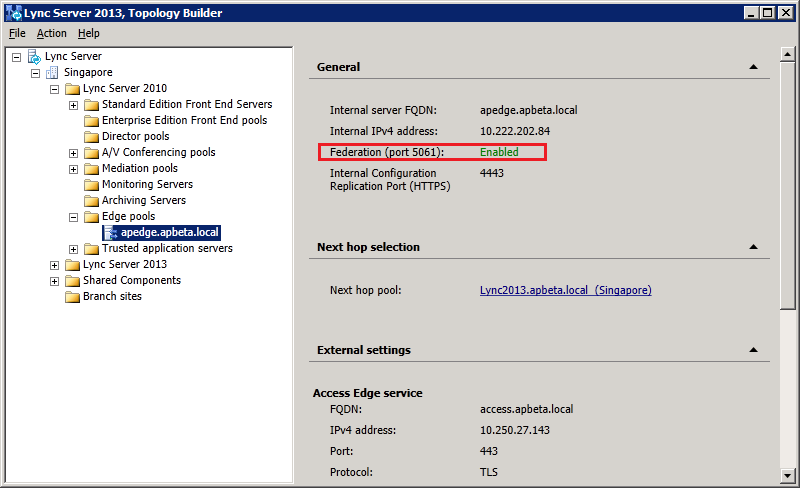 Edit the properties of the legacy Edge and uncheck the federation box: 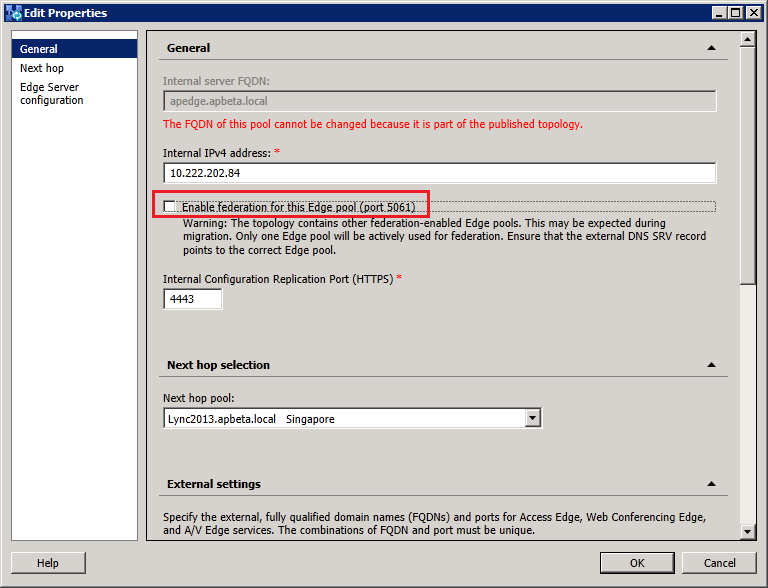 Finally, we publish the topology and make sure it is successful. The "Topology validation warnings" seen earlier should dissappear now. At this stage we should verify that all the following remote access and federation scenarios work for both Lync2010 and Lync2013 users:

2. Verify that anonymous users are able to join conferences.

This article along with the preceding article desribed how to introduce the Lync2013 Edge into an existing Lync2010/2013 deployment and how to migrate to the new 2013 Edge. The steps outlines are targeted for lab environment testing scenarios. For actual production migrations it is highly recommended to follow the detailed instructions contained in the official Lync documentation.