Lync2013 introduces some exciting new disaster recovery abilities where two or more Front End pools across two geographically dispersed sites can be "Paired" together for redundant failover. Each site can contain a Front End pool which is paired with a corresponding Front End pool in the other site. Both sites are active, and the new Lync2013 Server Backup Service provides real-time data replication to keep the pools synchronized. The Backup Service is a new feature in Lync Server 2013, designed to support the disaster recovery solution.
It is installed on a Front End pool when you pair the pool with another Front End pool. There is no restriction on the distance between two data centers that are to include Front End pools paired with each other but high-speed links between them are recommended.

This article explores in detail how to setup this pairing relationship and  puts the failover capabilities to the test in a lab environment.

To setup Lync2013 Pool Pairing, we need to have two Lync2013 pools. If you haven't already installed Lync2013, check out my previous blog post here. In this article, I have already installed two Standard Edition FE pools as shown in the topology builder below: 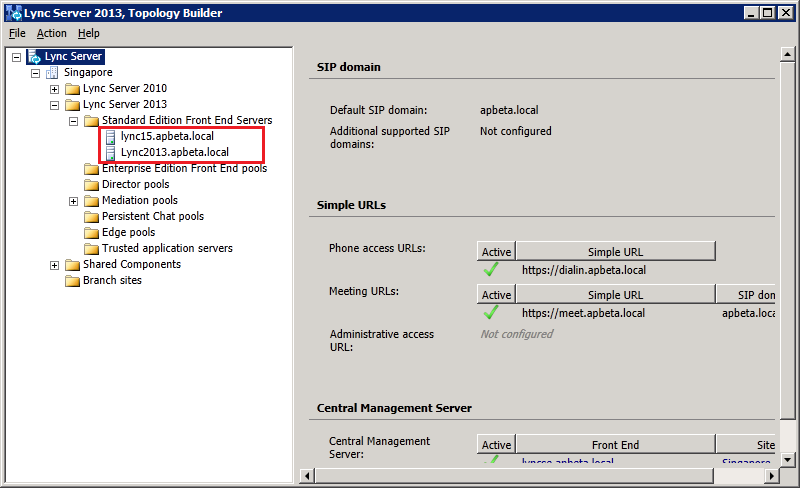 Configuring the two FE Pools above to be backup for each other is relatively straightforward. From the Topology Builder, right-click one of the FE servers (any one will do) and select "Edit Properties..." In the properties window, select the "Resliency" tab on the left. Then select the "Associated backup Pool" checkbox and from the drop down list, select the other FE server as shown below: 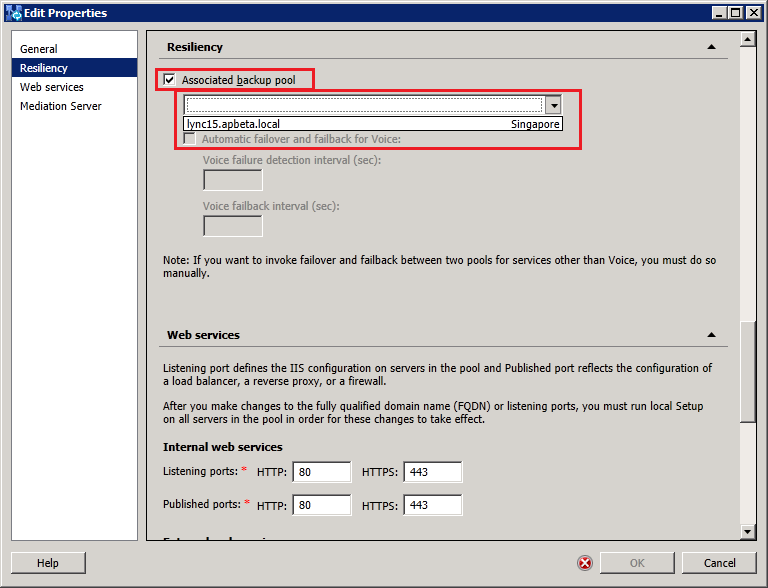 Note that the default intervals for is 300s and 600s. For this test, we will set both to 30s. Go ahead and select the "Automatic failover and failback for Voice:" checkbox and enter 30 in both boxes as shown below: 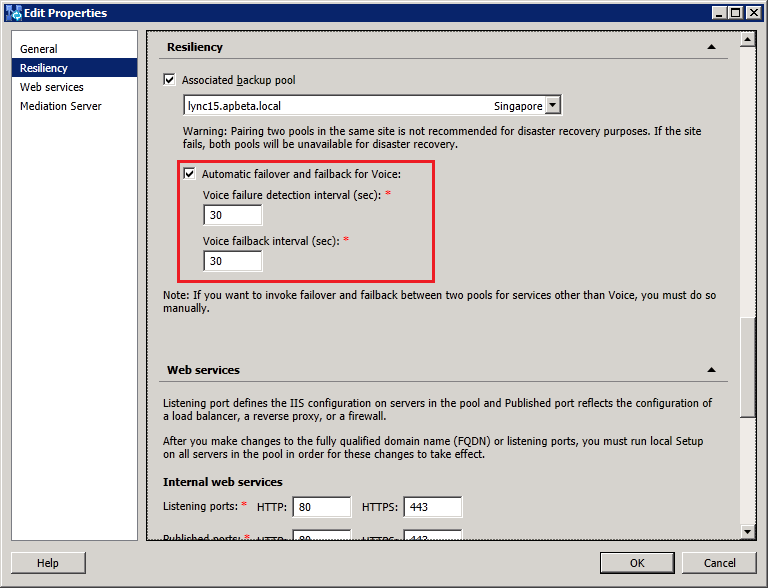 Once the first FE server is configured, the other paired FE server will also be automatically configure the first FE server to be its backup registrar, thereby creating a 1:1 reciprocal relationship. We can verify this by looking at the properties of the other FE server. Proceed to publish the topology and verify that it was successful. Following this, we need to run local setup on each of the Front End Servers and then restart the servers just to be sure. Finally, start the CS Backup Service by running the powershell cmdlet Invoke-CsBackupServiceSync on one of the FE server. If you encounter some WCF permissions error running this cmdlet, you need to add yourself to the RTCUniversalServerAdmins” group, re-login to windows and rerun the cmdlet. A sucessful result looks like the screen capture below:

Configuring and Monitoring the Backup Service

One of the key components of the Pool HA capability is the Backup Service that runs automaticaly on the front end pools that are in a paired relationship with another pool. The Backup Service ensure that all the necessary information in one pool pair is replicated to the other pool pair. In the event of failover, the active pool will contain the necessary database information required to hosts users from the failed pool.

The following new Powershell commands are for managing the Backup Service:

Before initiating a Pool Failover test, let's have 2 Lync users make P2P video call under normal conditions. In this instance, both users are on the Lync2013 FE Pool which is configured with the Lync15 FE Pool as the backup pair. Below shows the screen capture of the call in progress.

It's now time to test the pool failover scenario. Since we will be performing a pool failover that involves the pool hosting the Central Management store, in this case Lync2013.apbeta.local, we must fail over the Central Management store before failing over the Front End pool. to do this, we run the Invoke-CsManagementServerFailover cmdlet on the still surviving FE Pool Lync15.apbeta.local: 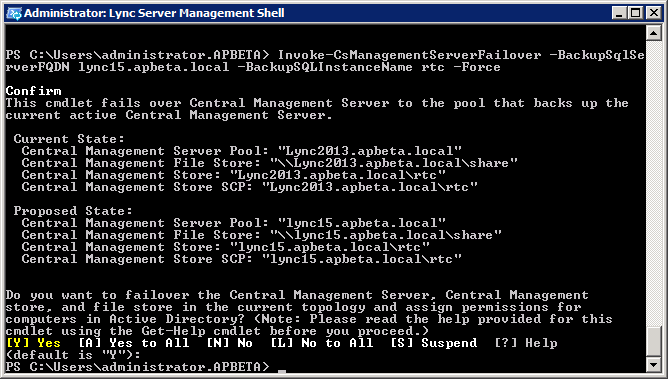 Now that the CMS database has failed over to the other FE pool, we can initiate the actual Pool Failover using the Invoke-CsPoolFailover -PoolFQDN Lync2013.apbeta.local -DisasterMode cmdlet: 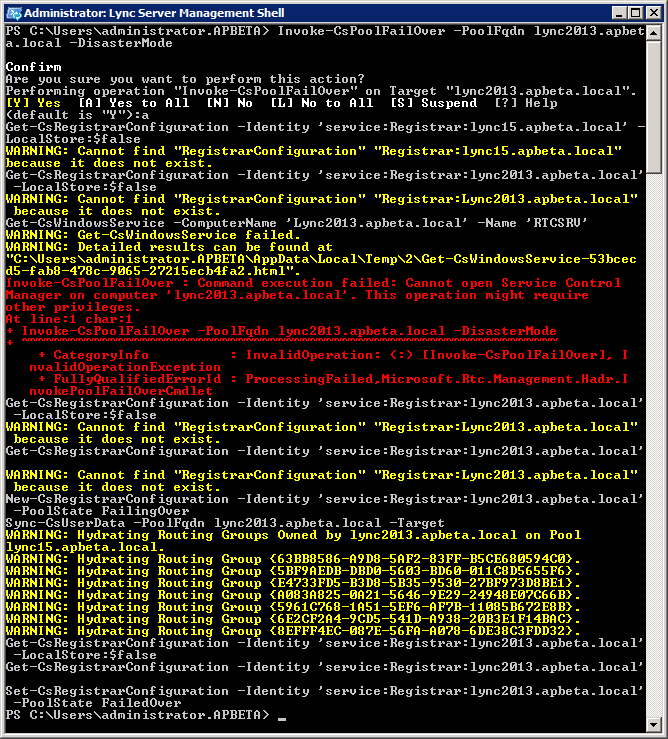 Once the pool failover has suceeded, the Lync clients are restored to normal functionality with presence enabled, all the while the video call is still ongoing and did not drop at any time during the test:

Assuming now that the first FE Pool Lync2013 has come back online and we wish to failback users to this pool, we can run the following cmdlet : invoke-CSPoolFailback -PoolFQDN Lync2013.apbeta.local. Users do not experience any outage during the failback process. We do not need to failback the CMS database anymore and it is fine to leave it running on the second Pool Lync15.apbeta.local: 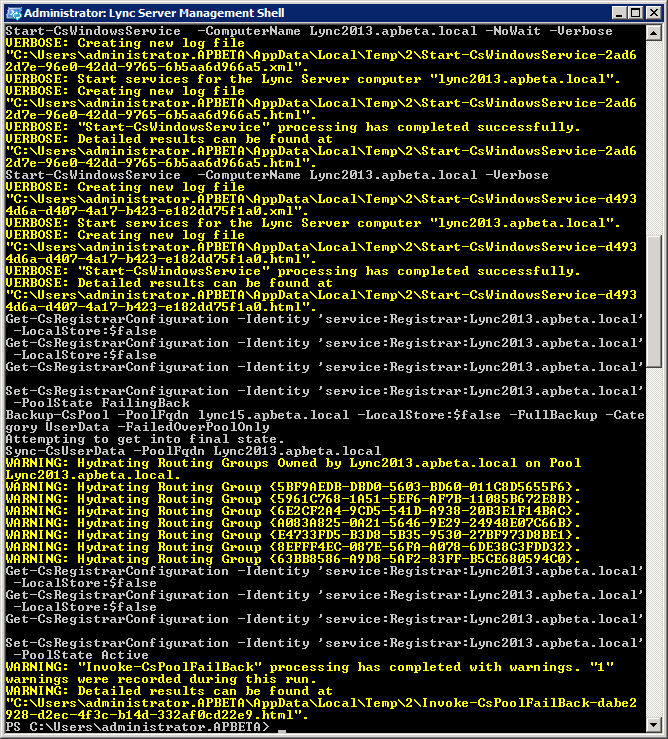 In conclusion, the new Pool Resliency features in Lync2013 offer a much better user experience with its Pool Pairing and failover/failback capabilities. Add SQL Mirroring (to be discussed in a future article) and we truly have an enterprise-ready HA and DR solution offered with Lync2013 which will greatly benefit both users and administrators.